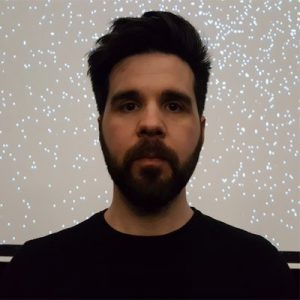 Manoli Moriaty is an artist and researcher exploring the synergy and interactivity of sonic and performance arts. Regularly collaborating with artists and creative practitioners active in dance, theatre, visual & performance art, the interacting media, practitioners, and cultures are considered as distinct organisms of a shared ecosystem, and are arranged within a conceptual structure informed by biological and evolutionary perspectives of social organisation. His work intersects aesthetics drawn from, sound art, noise improvisation, electroacoustic composition, and rave music, and combines processes and methodologies from ethnomusicology, Practice-as-Research, and human-computer interaction.

Migrating from Athens to the United Kingdom in the late 90’s, I was lucky enough to catch the rave movement’s swan song. For the best part of the following decade, I played Jungle and Techno music at clubs, squats, and festivals across the North West, and travelled with sound systems as far as Eastern Europe. Following a diagnosis of chronic tinnitus, and the good fortune of studying composition and music technology with Stephen Davismoon, Joe Duddell, Nicola Spellman, Craig Vear, and Alan Williams, 2010 saw me migrating again, this time into sonic-arts.

For the past ten years, I have engaged with numerous milieus pertinent to music, performance, and research. Personal highlights and milestones include presenting and performing work at Word of Warming, ICMC/SMC, Supersonic Festival, FOCUS Wales Festival, the New York City Electroacoustic Music Festival, Surge Glasgow, Electric Nights Athens, the Beijing New Dance Festival, Shanghai’s West Bund Centre, the Manchester Science Festival, and the Ionian Academy’s Audiovisual Arts Festival. I had the pleasure of performing with the BBC Philharmonic Orchestra and the Echo Echo Dance Company, and to compose live scores for Jim Cartwright‘s Burning Bright and Teresia Björk‘s Vi-We-Nous. I received commissions and funding by Arts Council England, the British Science Association, Sound & Music, and IdeasTap, and held residencies with the NOVARS Research Centre, the Manchester International Festival, the Great Exhibition of the North, and Medea Electronique. As the principal curator and producer of the Metanast collective, I organised a series of concerts aiming to showcase artistic practices traditionally associated with academia in the context of nightlife clubbing, with the series hosting over 100 artists from more than 30 countries.

I have written articles and chapters published by Taylor and Francis, Springer, and the Society for Artistic Research. More recently, I completed a Practice Research PhD examining polydisciplinary collaboration in performance practice, under the supervision of Joanne Scott and Stephen Kilpatrick. My doctoral research was made possible through the Pathway to Excellence Scholarship by the University of Salford, where for the past five years I have been a lecturer at the School of Arts & Media, teaching undergraduate and postgraduate modules on music technology & performance, theatre practice, and multimedia performance. I have delivered guest lectures and workshops at the Estonian Academy of Music and Theatre, the Chinese Academy of Arts, Leeds Beckett University, Liverpool Hope, CAST at Doncaster, and Wrexham Glyndwr University.